I finally spent some time doing the test mosaic, and I'll just start off by saying I'm glad I did a test like this first because I learned some things.

First off, I finally found my safety goggles (to be used when cutting glass tiles that fly apart at great velocity) in the very back of the junk drawer. Who knew that the most useful item I'd retain from all of my college years would be the five dollar chemistry safety goggles? Anyhow, they held back my hair really well until I was about halfway through cutting tiles and remembered that they were supposed to be protecting my eyes and not shoved back on my head.

The biggest lesson I learned is that my intended foreground and background colors don't contrast enough with each other. I think I might have been able to pull if off it I'd only used one shade of purple and one color in the background, but as it is it just all blends together.

I'm going to cheat and show you the picture I started with: 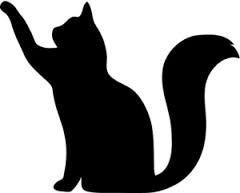 So having that in your mind, you might be able to see the cat in the picture below. The white stuff on the wood is glue. I suspect I was using too much but the nozzle made it hard to just have little amounts come out. 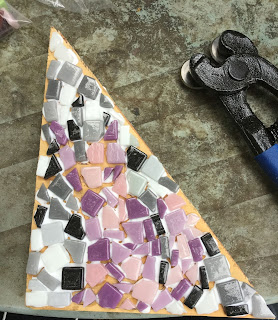 Back when I was ordering supplies I'd decided to make the grout black. I got a little worried when I applied it and achieved this: 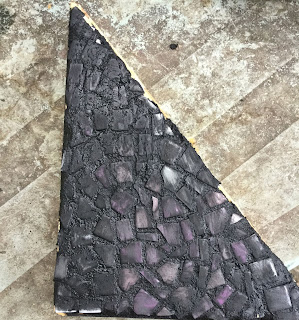 But after I wiped away the excess after it had dried a bit, I ended up with this: 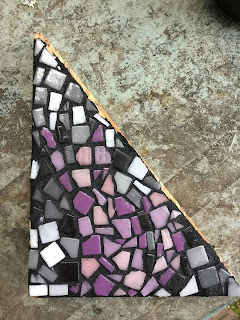 It's not exactly what I was aiming for, but I learned a bunch and I think I can do a better job next time. It didn't take as long as I thought it might. I still might sign up for the mosaic class that's being offered down the street, though. It could only make things better...
Posted by Theresa B (of Nebulopathy) at 7:05 PM