Some random things near or on the ceiling in my room...

Sure, it looks like an electrical socket that they put a cover over... Maybe because they realized that it was three inches from the ceiling. Probably really convenient for the tall freaks people, but not ADA compliant. 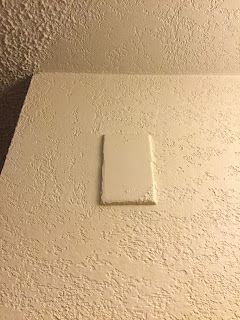 And then there's this thing next to one of the sprinklers. How many smoke alarms have they installed and removed in this room? 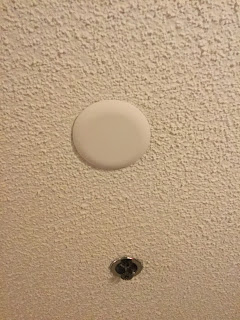 Finally, we have the current smoke alarm.I know it's active not because I've set it off (yet), but because there's a bright green light that flashes twice about once every five seconds. Not really something you notice during the day, but if it's dark, like say... you're trying to sleep or something... 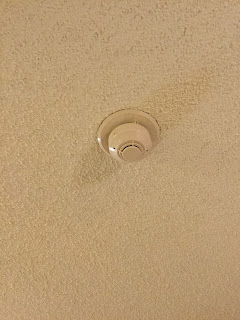 So there you have it. Random things on or near the ceiling. And for the record, trying to update the blog from an iPad is pretty annoying. So if all you get each day for the rest of the month is one picture with no text, you now know why.
Posted by Theresa B (of Nebulopathy) at 11:07 PM