The little dog was so excited to get in the car, even after watching me pack a bunch of food and treats for her. She seems to lack the logic to put it all together even though she's stayed at the hospital multiple times in the last few years. She remained convinced that we were going to agility right up until I handed her leash off to the kennel helper. Oh well. I'm sure she got over it in ten minutes or less and was running gang initiations before I'd made it back home.

I made my favorite cookies-that-I-burn-pretty-much-every-time today. I can either blame the person who made them, or the photographer, but either way... it's not really what they're supposed to look like. 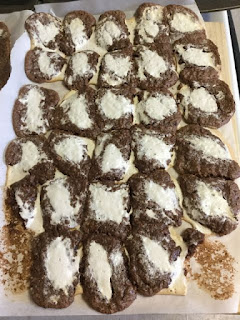 In trying to make sure I didn't burn them I think I undercooked them a bit. They're a bit gooey. Still, they taste alright.