You might not know this, but I was brought up in a church-going style. Mostly this has left me with a fear of being trapped in an uncomfortable seat listening to some old guy speak, a dislike of choirs where the sopranos outnumber all the other parts by a factor of five to one and are trying to compete to see who can sing the loudest, and an absolute love of sleeping in on Sundays. However, it did also provide me with some useless Catholic trivia.

Did you know that the Catholic Church used to sell indulgences? Apparently if you had money, there was no need to schedule a confession at the last possible moment in order to get into heaven. You could just pay the Church a bunch of money and alakazam! Your soul is shriven and through the eye of the needle you go! We have something similar in the secular court system, but nowadays you have to hire an expensive attorney and at least pretend to be humble while the judge is looking.

Anyhow, the point of this isn't to prove that 1/7th of my childhood wasn't wasted. And it isn't even to have an excuse to bring up my mother's relative who had an elaborate plan to live a sinful life without the benefit of church then confess everything on his deathbed, a plan that was thwarted when his devout (or possibly malicious) wife wouldn't let the priest in the house at the last minute. (It is an awesome story, though, so it deserves to be mentioned.)

No, the point here is to acknowledge that subconsciously I believe that fitness ought to work the same way.

I hate exercising, and it shows. Sometimes I'm not upset when my dog refuses to go to the right obstacle during a long agility run because it gives me an excuse to stand there and catch my breath. But every once in a while I realize that I really ought to be in better shape. So I go buy something. Running shoes, an exercise bicycle, an elliptical machine -- if fitness was a function of money spent, I'd be able to run a marathon.

Sadly, exercise indulgences have also been a big failure.

But... this time is going to be different! 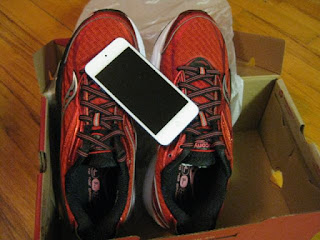 This time I have running shoes and an iPod Touch that has an app on it to make me feel that zombies are chasing me! That will make all the difference!

Or at least it should...

Zombies were the reason I started running a few years ago. I felt my metabolism shift and was like "Hmmm, if the zombies attack I will die unless I do something about this." So I started running!

If you need some encouragement or somebody to drive out and prod you into running, let me know!!

I'm starting the Zombie 5k plan (um, tomorrow...). Let me get up to the point where I can run more than 50 feet and I may take you up on that!

I totally do this. We will not look in my gym bag. I also like to buy athletic clothes with cats on them to motivate me to go and work out.

Does it work? Asking for a friend.

Sometimes. Actually more often than not. This is how I ended up with my Check Meowt shirts and flying cats leggings. I am getting a tank for Rich's holiday party that says Meowy Christmas.