Okay, so apparently marzipan is not my medium either.

After the huge success of the marshmallow fondant storm trooper, I decided to try modeling in marzipan.

First off, the pre-made marzipan (imported from Denmark with no expiration date) was hard as a rock and could only be formed into a solid log with dimensions to fit in the box. Luckily, I had a backup plan, in the form of almond paste, which makes marzipan when mixed with powdered sugar and a little corn syrup. That, at least, could be dented.

I'm sure you'll agree that the results are spectacular. "Wow" is the appropriate response here. 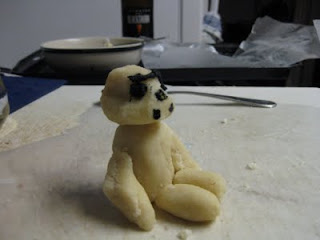 In this next image, the storm trooper is being menaced by Cthulhu (aka, the unknown tentacled being from my reef tank). The part of the rock is being played by my Blackthorn cider bottle. (I suggest that you consume a bunch of it and view these photos again -- it only makes it funnier.)

You can tell the storm trooper is frightened because his arm is sliding off. 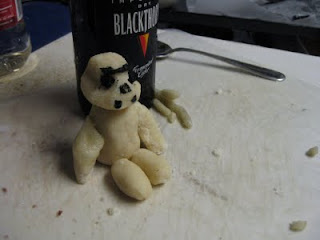 Perhaps I'm not ready for prime time, but who cares? My skills can only improve from this point onwards.

In other news, I remembered that I was supposed to put extra shells in the tank so the hermit crabs don't kill off the snails when they need a new shell. I couldn't find exactly the right shells, but I found a bag with a bunch of different types. I threw some in the tank. 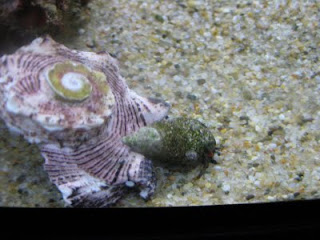 Both hermit crabs were extremely excited about this one. It's about ten times as big as either one of them, and I don't think there's any way they could ever grow large enough to need that shell, but it's good to dream. This seems to be the hermit crab version of a deluxe apartment in the sky. If I didn't refuse to name the invertebrates, they would henceforth be known as George and Weezie.
Posted by Theresa B (of Nebulopathy) at 10:51 PM