So, I haven't seen the tentacled being since I accidentally dropped a rock on it while prepping the tank for photos. However, I'm sure it will show up again, especially if it's something that I don't really want in my tank.

In the meantime, I fed the coral some mysis shrimp today. (Some of the coral in my tank is almost purely photosynthetic, but some do better with supplemental feeding.) I thawed a cube of little frozen shrimp, and then tried to put just one on each head of the coral with a turkey baster.

Here's an exercise for anyone reading: Go get your turkey baster, mix some fish flakes (or something appropriately flakey) with a few tablespoons of water, then suck in up in the turkey baster and try to administer just one drop to something at the bottom of a few gallons of water. It's not as easy as it sounds, and that's why there are dead little shrimp all over the tank. Anyhow, the coral were all very excited and I got to watch them eat. Very cool.

And then something (crab? large shrimp?) ran out of a hole in the rock, grabbed a dead little shrimp off the sand, and ran back in. Bizarre. I have no idea where that one came from.

Again, I took a bunch of really blurry pictures and this is the best of the lot. The Blastomussa polyp on the right has a fuzzy little shrimp going down the hatch. (The mouth is the darker spot in the middle of the bright green.) 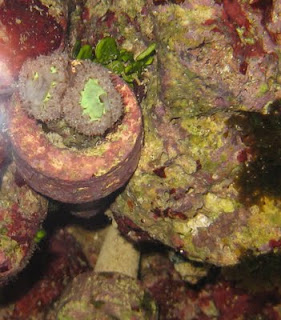 And just because I think it's so cool, here's what the Xenia does when all the pumps are off. It's moving all on its own in this clip. 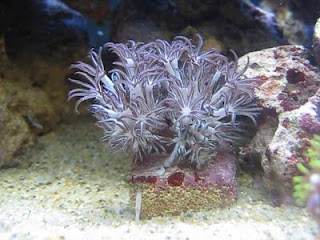 (Um... okay, you may have noticed that this is a still picture. That's because I'm giving up after trying to get the 15 second video to load for the last two hours. Just imagine the little polyps opening and closing like tiny little fists. Using your imagination is good for you...)

Someone today said they would never put a Xenia in a tank because you shouldn't "plant weeds", but I think it's just the coolest thing. What's a weed anyhow?
Posted by Theresa B (of Nebulopathy) at 10:45 PM

I like your tank. I have no interest in setting one up or maintaining one, but I do like looking at this stuff.

I did try to use the imagination, but it was rusty from disuse.

Okay, obviously I am failing in my goal to get other people to set up tanks and eventually provide free coral frags. I'll have to rethink this...

Maybe I can create a schematic for a little puppet that you can knit to help you imagine the Xenia moving around. Would that help?