"Maybe it's another drill."

Well, the five year old's birthday party was this weekend, and you know what that means... Okay, aside from a short term boost in the economy as the entire output of China is funneled into his living room. No, the important thing here is that the party was the deadline for the storm trooper cake.*

Now, I know I've had a couple of misfires on this whole project, but everyone knows I never really do anything until the last minute, so I figured there was still a chance that it could all turn out alright.

Anyhow, Jeff and I whipped up a double batch and began the process... 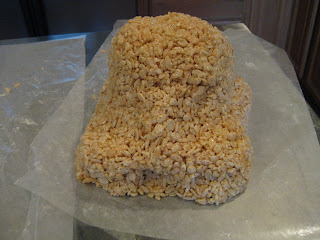 My two fears were that I would burn my hands molding this, and that it would set too quickly. Both fears were unjustified. We had lots of time to tweak things, and it was pretty much room temperature after about a minute. If you do this at home, make sure you have an extra set of hands to help compress the Rice Krispies. Also, Crisco is your friend.


Next we covered the base with the marshmallow fondant. The source of many of our problems at this point was the web site from which we got the recipe for marshmallow fondant. It called for two pounds of powdered sugar, and at one point says to add 3/4 of the sugar, but that extra half pound is never accounted for. I suspect it was supposed to be kneaded in at some point. As it was, the fondant was very saggy... 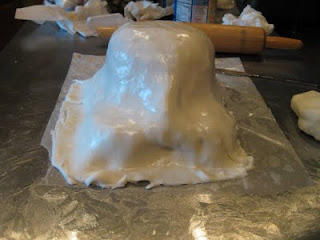 I think this was the point when Jeff, in a heretofore unseen streak of perfectionism, began referring to this as his Alan Smithee project. I've done enough of these things to know that no matter how bad it looked at this stage, it could have looked much worse. Like a true diva, Jeff eventually changed his mind again and re-attached his name to the project.

A little black food coloring later, here we have the final product. I think it looks great. The only part I wasn't really happy with was the mouth line because there was no way to make it look like anything but a mustache. It sort of makes him look like a bad guy from a Clint Eastwood movie.

We referred to him as "Pancho the Storm Trooper". 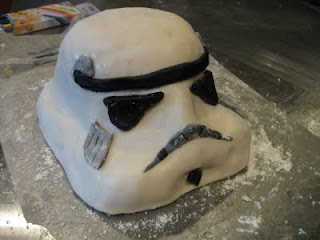 Anyhow, it turns out that most kids prefer Rice Krispies treats to cake and the whole thing was eaten. And now the saga is truly over.

* The other important thing that happened was that my nephew finally remembered my name for the first time. However, apparently he only has one slot for that sort of thing since he forgot K-poo's name as a consequence. It worked out great for me since K-poo got him a nice gift and he can't remember which one of us gave it to him.
Posted by Theresa B (of Nebulopathy) at 8:27 PM

I feel responsible for the mustache.

The 5 year old woke up puking thing morning -- it was probably the other cake.

Or it was the bangers.

Tonight, before starting building 'Indiana Jones' legos, I showed the boy the helmet picture and asked him, 'do you remember who made this cake for you?'