As promised, version one of the storm trooper cake project. 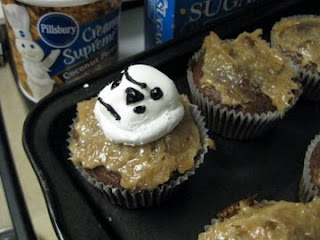 Yeah, it looks a little bit like a seagull was having some intestinal problems before flying into my house, but surely you can see... okay, so I won't have to pay royalties to Lucas any time soon.

That was done with a modified marshmallow fondant. Modified because I just can't follow directions ever. Anyhow, I think attempt number two will be with marzipan. Mostly because I like the taste.

On a brighter note, I made a really good salsa verde out of the tomatillos in the garden. However, it's a good idea to cut serrano chilis in half before roasting them because otherwise they plump up and explode. The oven may never be the same.
Posted by Theresa B (of Nebulopathy) at 10:45 PM

I suppose we could make up a story about storm troopers who were attacked by an acid-spitting monster.

Actually, it looks like the Wicked Storm Trooper of the West after a rain shower.

I'm thinking that the full-size version might be easier because I would use colored fondant instead of piped icing, and that would make it look totally professional.

In the meantime, "These are not the melting droids you seek."

I have a bad feeling about this.

Oh come on, he's going to be five. He won't care what it looks like! It's all good.

Hey, this looks pretty good!! You have a very steady hand. I'm fast approaching 50 and I can barely see a cake, let alone decorate it!!
As for another's artistic interpretation of you, well that's another story.......

A steady hand is all about bracing the arm on something. It's something I learned when dremmeling parrot nails, but it applies to pretty much everything.

It might have been easier to do if my frosting tips had fit the tube of black frosting -- as it was I was holding the tip onto the tube with one hand and just making a huge mess in general.