Working On My Fitness

Embarrassing admission of the day: I bought Ke$ha's album and I've been listening to it while working at home. Just thought I'd get that out of the way.

Anyhow, I've been thinking lately that maybe I should work on my upper body strength at some point. Usually I think about this while I'm lying in bed, or watching something on hulu.com. Obviously this need to get stronger hasn't interfered with my lifestyle at all.

I realized today, though, that I don't really need to join a gym or get a set of weights -- I just need to do more yardwork. I used the weedwhacker to knock back some of the weeds engulfing the yard, and an hour afterward I found that I couldn't actually lift my arms. It was an oddly dissociative experience -- my brain was thinking "lift" and nothing happened. And it wasn't like I was working for hours -- I have a rechargeable weed trimmer, so it only lasts for about twenty minutes (which is generally about as long as my attention span, so it works out).

The danger of doing yard work, especially out front, is that I have to come up with something to talk about when I see my neighbors. Luckily this week after Larry, my 65 year old neighbor, apologized for not cutting the other half of my lawn (because he ran out of gas, literally), we got to talk about the trenchless sewer line replacement. Sure, I spent thousands of dollars on a pipe in the ground, but at least we had something to talk about.

I think this may be why people renovate their houses...
Posted by Theresa B (of Nebulopathy) at 9:49 PM 2 comments:

I'm trying a new place this time. Normally I go to the dealership, because... I don't really know why I go there. It's inconvenient and I always feel like I'm getting ripped off. Note that I have no information one way or another as to whether I really am getting ripped off, so my feeling about it is the only thing I have to go on. Anyhow, I've decided that if I'm going to get fleeced, I might as well go somewhere that's conveniently located, so why not the place that I walk the dogs past every morning?

When I called for an appointment, the guy asked if I had the maintenance records. That's where my ability to pretend that I'm an adult fell apart. I'm supposed to save that stuff? Now they tell me?

I guess I was supposed to learn by example on this one. Thinking back, I'm fairly sure my parents kept a folder of everything related to each car they owned. However, my parents also kept a log book and wrote down the mileage every time they put gas in the car, so obviously they're just insane. (This obsessive record keeping was useful when the gas gauge stopped working in the van, though, until the odometer stopped working as well.)

So now I have to go into my new mechanic's tomorrow morning and admit that I have no idea what anyone has ever done with the car. Great.

I was feeling somewhat stupid because of this, but then I happened to talk to Jon (my cubicle neighbor who looks a lot like Santa Claus). His Prius was in the shop Wednesday because it needed a new battery -- not the regular battery but the other one.

Then I found out that he hadn't done any maintenance on that car for the last five years, also known as 85,000 miles. None. Not even an oil change.

The Theme of the Day Is Things That Stink

However, I'm thinking of throwing out the starter and retrying the grand experiment again in June. Here's why:

- Yeast are about like me when it's cold. They don't want to do anything. The instructions on the sourdough starter package talk about letting the starter sit at 80 degrees. There isn't anywhere in my house that is 80 degrees at the moment. The gas oven doesn't even have a pilot light, so the yeast were sitting around doing nothing at 65 degrees like the rest of us.

- When I finally did get the yeast excited, I found that sourdough starter smells... sour. With the house closed up the entire kitchen smells like rotting milk. This is not exactly the homey kitchen smell I was going for.

On the plus side, I made a pretzel, some rolls, and some decent flatbread this weekend. The flatbread is pretty much welded to the pan I made it in, so it's a little difficult to eat -- next time things will be different.

Also in the learning experiences category this weekend, I found out that they used something called "Orangeburg pipe" for the sewer when they built my house 53 years ago. Here are the relevant sentences from the wikipedia entry:

Lack of strength causes pipes made of Orangeburg to fail more frequently than pipes made with other materials. The useful life for an Orangeburg pipe is about 50 years under ideal conditions, but has been known to fail in as little as 10 years. It has been taken off the list of acceptable materials by most building codes.

I managed to skate past Valentine's Day this year without contributing to the billions (seriously, the number is in the billions) of dollars that Americans spend on cheap crap on the made-up holiday.

But today I am here to extol the virtues of the most amazing meal in the world. Yes, that's right, it's time to talk about cream of asparagus over toast.

After twenty-something years of living on my own, I've finally accepted that most people view this combination with a mixture of horror and superiority. To them, I say... well, this is a family blog, so I won't say it, but you know what I mean.

Toasted bread, with warm salty, fatty Campbell's Cream of Asparagus soup (made with half a can of milk, mind you) combine together to make the best comfort food ever. A little bit mushy as the soup soaks into the bread, but still chewy with the crusts of the toast maintaining their texture -- it's the perfect foul-weather food.

In fact, the only reason that more people don't eat this on a regular basis (as far as I can tell) is that is has become quite difficult to buy Campbell's Cream of Asparagus.

So if you happen to be in a different grocery store and you see some on the shelf, well, I know of at least six people who would envy you...
Posted by Theresa B (of Nebulopathy) at 11:20 PM 6 comments:

So I went out to dinner on Monday night with K-poo and Patrick at YaYu in Oakland.

Those Oakland street planners really don't like to give people much warning in the way of street signs or indications that a lane is about to end. This is why I try not to drive to Oakland very often, which may be what they intended. They also seem to be completely avoiding any street maintenance on Lakeshore -- that way they can save money both on the materials for the street and putting up speed limit signs. If you go any faster than 25 mph you run the risk of doing major damage to either your car frame or your tires. As my cubicle neighbor Jon (who lives in Oakland) says, they've decided to spend the money on police instead. He's okay with that.

Anyhow, YaYu is an Ethiopian restaurant, which just seems all wrong since it doesn't fall into the previously documented [color][body of water] theme in naming Ethiopian restaurants. Be that as it may, the food was pretty good although no nightclub activity was to be had, so it felt a little odd.

Things I found out from K-poo during dinner:

- Her welding class is actually welding and woodworking, and she's making a leaning (intentionally, not like the Tower of Pisa) bookcase. She's also officially the furthest (or possibly farthest) behind of anyone in the class, which she claims is because she lets everyone else use the equipment.

- Two weeks ago she bought a bag of taffy-flavored cookies because the grocery stocker convinced her that they would "change her life". She claims the purchase was to allow her to stock up on earthquake supplies. Yeah, that went about as well as you would expect. The cookies are gone, although to be fair, there were a few tiny earthquakes that she is using for justification.

- My sister claims she is actually Latina. (This is news to me, and to my parents, too, I bet.) I won't even try to reproduce the logic behind that statement.

- She's volunteering for some group that takes disadvantaged kids out on boats. They aren't allowed to throw the kids overboard if they are being obnoxious. (I asked.) (Jeff asked the same question when I relayed this information.)

So, yeah, it was a fine dinner. I also got to hear some good stories from Patrick about a place he worked that only had six people -- one of the owners admitted that she didn't know what he did during his performance evaluation (because she was clueless, not because he was useless). That's always a good sign. Almost as good as your boss falling asleep during a one-on-one meeting.

Hopefully my contribution to the Oakland economy will allow them to pave the street sometime soon. They have a year or so before the next time I go back...
Posted by Theresa B (of Nebulopathy) at 10:02 PM No comments: 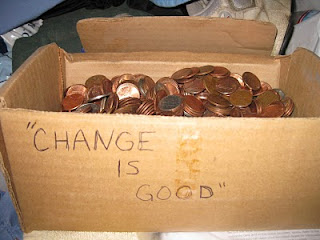 Posted by Theresa B (of Nebulopathy) at 10:14 PM No comments:

Thanks for the memories...

Here's the thing -- as far as I can tell, my brother Jeff sprang into being fully formed (or malformed as the case may be) at the age of about twenty. I remember a significant portion of his childhood, because, you know, I was in the area for all but the first three years. He, on the other hand, while technically present during the entirety of his childhood, doesn't remember more than about five minutes of it.

I can describe most of the layout of the house we moved away from when I was three or four years old. (My mother has corroborated what I remember, so it's not like I'm making the whole thing up.) My brother... not so much.

I also remember being in a Girl Scout troop when we lived in Missouri, except that in that location at that time there was a step in between Brownies and Girl Scouts called June Bugs. The uniform looked pretty similar to the Girl Scout uniform. I don't remember selling cookies, but we did sell a book of recipes. We learned to country dance in someone's basement. (Missouri, in winter, you're going to be in the basement. Better than "camping" at the mall like my sister's Girl Scout troop in southern California did.) I know that this thing happened because even if my memories were falsified, my mom kept my sash with all of the useless badges on it.

Yet... there's no evidence of this whole June Bugs thing anywhere, and everything is on the internet.

So, in a world where my normal phrase is "pictures or it didn't happen", did I even have this childhood I remember? I'm leaning toward the abducted by aliens theory myself...
Posted by Theresa B (of Nebulopathy) at 11:20 PM 2 comments: