Once again, it was time for Jeff and me to pretend we have artistic talent and the ability to decorate a cake. Last year we stepped into the ring with the Pancho the Storm Trooper head. This year the birthday boy said we had to make a Kraken (which is a mythical sea monster that looks a lot like a huge octopus/squid, for those unfamiliar with the term).

Once again we went with the Rice Krispies treat base covered by marshmallow fondant. 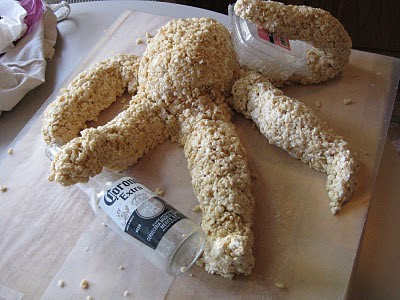 We needed something to help hold the tentacle form while it was warm, and the beer bottle was the closest available object. That should say something...


Jeff was able to bury his perfectionist streak a little better this year, or maybe things just went a little more smoothly this time. The fondant was certainly easier to work with this year -- probably something to do with switching to a recipe that actually told you what to do with all of the ingredients.

Eric didn't believe me when I told him I was going to buy a spray can of food coloring. Here's the proof:

And here's the final product: 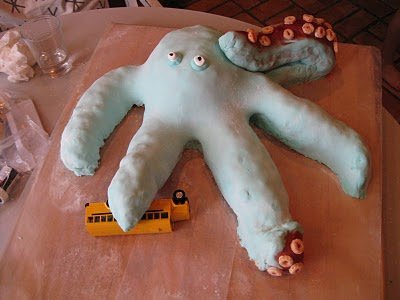 There were a few naysayers who kept pointing out that the Kraken only had five tentacles. To those people I have these responses (take your pick):
1) Show me a picture of this mythical creature that proves it has eight tentacles.
2) There are three tentacles still underwater (and thus not visible).
3) It used to have eight tentacles, but three were bitten off in previous epic battles.

Anyhow, it was fun to see family and friends at the party although I remain pretty much horrified that it is acceptable and even expected for a six year old with a house full of toys to receive hundreds of dollars of new toys. Of course, now that the birthday boy can actually remember my name, he's also capable of remembering that I didn't bring him a present...
Posted by Theresa B (of Nebulopathy) at 8:37 PM