Now that we've established why I suddenly needed to repaint the bathroom (because the shower head broke), it's time for an update.

On Saturday, Jeff drove up with the five year old to help prep the front bathroom for painting. By prepping, I mean specifically 1) removing the toilet tank (so I could paint the wall behind it) and 2) taking down the 6'x3' mirror on the wall.

When he left a few hours later, the other bathroom looked like this: 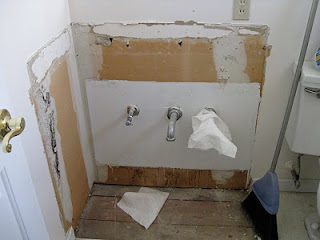 Yes, that's the spot where the sink was before Jeff demolished it with a hammer and a screwdriver.

It turns out that when the metal sink has damage to the porcelain, it will rust out to the point that the whole sink basin needs to be replaced because it is just dumping all the water into the interior of the vanity. I hadn't noticed it was leaking because I never use that bathroom unless something is wrong with the other one, like the toilet has been taken apart so I can paint behind it. Naturally the sink basin was built in to the vanity, so the whole thing had to go -- concrete, chicken wire, and three inch nails, all of it.

I was actually a bit shocked that it didn't snowball further from there. Jeff was able to pull the whole project back from the brink of home disaster, and he explained everything I needed to do to finish up before he drove back home. I'm guessing he won't be back soon...

Anyhow, the vanity I need is on back order at Home Depot, so I'll have some time to figure out how to either make new friends with strong muscles or figure out how to maneuver the thing from my car to the house. Anything is possible.

K-poo did come over today to help me paint the front bathroom. My prep motto: the primer will fix that. My painting motto: the faux finish will hide that. Tomorrow I'm going to do something for the faux finish. K-poo is convinced it will be a disaster. She's probably right, but it won't be as ugly as that wallpaper. Or at the very least, it will be a new ugly, and that's all anyone can ask for...
Posted by Theresa B (of Nebulopathy) at 10:02 PM

A vanity and a few valves? That's not too bad. I had expected to read about this in the paper.

Can I just point out that I have one toilet and one sink, but they aren't in the same bathroom?

Wish me luck -- I'm going to try to put the toilet back together again this afternoon. Keep checking the papers...

It's really finished because I'm not doing anything more. But I used some technique out of a book -- I'm happy with it...