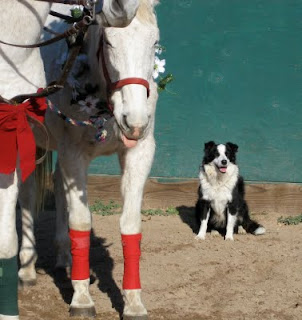 Here are his qualifications:
For all his faults Mackie's still a pretty nice dog. He's just useless as a farm dog. Oh well. At least he's neutered.
Posted by Theresa B (of Nebulopathy) at 9:08 PM

Wow. An in-focus picture of wildlife. Not what I was expecting to find tonight. Next thing you'll be sharing recipes for cooking with olives.

Every time I feel old and crotchety, all I have to do is come here. Wow, suddenly I'm feeling better...

Rvan, I'm not really sure that Mackie is considered wildlife. The best part of the picture is the horse that is sticking his tongue out at the camera. But, yeah, it's pretty much in focus.

Jeff, maybe the slow chicks are the best ones. I think that was the theory in high school. And you are old and crotchety. Or at least older than I am.

What about lifting his leg on the hay??? I love the photo. He is so happy all of the time.

Ah, yes, to top it all off, I caught him peeing on a bale of hay over the weekend. Maybe that's why some of the horses are skinny...

Leave it to jheeder to find the positive side of things. Well done.

Heeder really is the male version of Pollyanna. It's true.

That's funny since I always thought Pollyanna was pejorative but after reading the wiki, I realize that it's anti-pollyannish to think so.