The Wonderful Blizzard From Paws

So I bought a used 14 gallon tank for my new nano-reef a few weeks ago, but it has been sitting on the floor of my living room since then because I didn't have anything to put it on. Yesterday I finally went out and bought a kitchen stand that looks sturdy enough to hold over 100 pounds of water.

You'll notice that I still don't have any water, rock, or sand in there since I didn't quite make it to the aquarium store. But, you know, nano-reefs require lots of patience (or so everyone says) so don't be rushing me! After I get the salt water and live rock in there it may still be six weeks before I can add any coral.

(And if you want the specifics about whole ammonia goes to nitrites which go to nitrates which get taken up by plants or macro algae or dumped during water changes, go look it up yourself. What's cool about it is that it's the same process (on a smaller scale) that happens out at the water treatment plant where I took a tour during one of my biology classes. )

Anyhow, here is the stand with the empty tank. 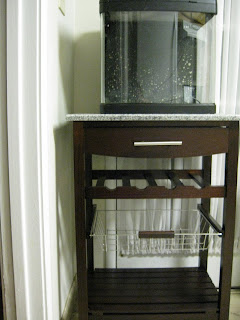 And here is the packaging after the cats descended on it. 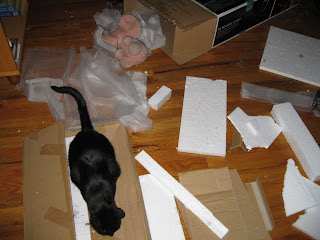 If you look closely, you will notice that even the pink elephant got dragged into the fun.

Turns out that tiny pieces of styrofoam (or whatever the generic name for it is) are a pain in the butt to clean up...
Posted by Theresa B (of Nebulopathy) at 9:05 PM

what happened to the doggie carrier?

I moved it to the living room. When I was explaining this to Rvan he started laughing about how single people have purely utilitarian furniture like that.

But really, who doesn't have a semi-destroyed wire dog crate in the living room?

What's a nano reef? Sounds cool and sciencey. Like I should know what it is.

Essentially it's a small (less than 25 gallons or so) saltwater tank with live rock as filtration and usually stocked with coral and maybe a few fish. There are some amazing pictures over at nano-reef.com.

Keira loves to gnaw on styrofoam and spread the tiny bits everywhere. It's true - those little suckers stick to everything.

Well, my nano-reef doesn't yet have water, so I hope your kitchen project is further along...