Who's Ready to Rock?

Things on the nano-reef front have taken a hugely exciting turn (which isn't really saying much since previously the tank held nothing but air...).

On Tuesday I got my shipment of live rock from Florida. I've learned a couple of things since then.
Keeping those things in mind, here are some pictures. 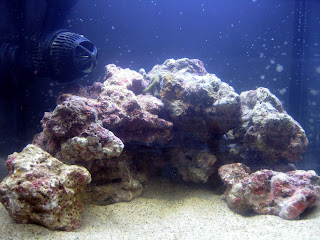 One of the rocks: the red/purple/orange stuff is Coralline algae. The little round white thing over on the right side just below midline is a Spirorbid worm (I think) which is a filter feeder. Maybe I should have cropped the picture more... 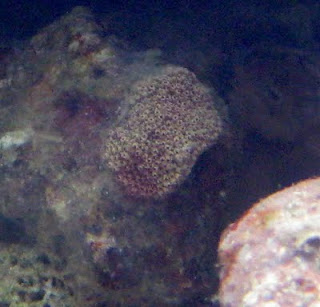 I'm fairly certain this is a sponge. But I could be completely wrong. 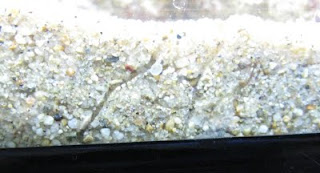 Evidence that some life survived the shipping process! (Worm tracks in the sand.)

So yeah, that's how the tank is going to look for a while until it finishes cycling and I spend even more money on it.
In the meantime maybe I'll read the manual for my camera...
Posted by Theresa B (of Nebulopathy) at 11:33 PM

Aquascaper. Sounds like a cool profession. or band name. The pics look good.

It looks very eerie. And the worm shot is kind of a Rorschach test, right? I don't see it. Fess up - you made those tracks with a straw!

Karen: For all I know aquascaper is a real profession already. The color on the pics isn't as good as it is in real life -- maybe I need to run it through something in photoshop to make it better? I also couldn't get good closeups of the little tiny things (like the feather duster worms, which look like two little feathers sticking out of the rock) but I don't know if that's a limitation of the camera or if I'm just not doing something right...

Eric: I'll point it out to you later. I swear it's there. Really.