A few years ago I wanted to color one person green (like the Grinch) in a photo as a joke so I pulled up GIMP and got really frustrated and eventually gave up.

Turns out it can be done by adding a layer of solid color, and masking around the subject.

I added another layer in between to switch the cat's color to black and white first, but I'm not convinced it was really necessary. (Also, Guido is a solid grey cat which brings up the question of why I thought it was a good idea.) 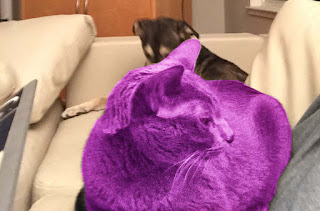 So... I've made him very, very purple. But at least I know how to make someone green the next time I want to.
Posted by Theresa B (of Nebulopathy) at 10:13 AM

He and Guido have a relationship of mutual annoyance. I'm pretty sure Guido's lymphoma has been in remission as long as it has because he refuses to give the big dog the satisfaction.

There's a certain level of love in that. Slightly twisted, perhaps, but love all the same. Hope he keeps it up for years and years.