Don't Mess With Me

For the past year or so I've been catching glimpses of an orange cat outside my house. Based on his head size, I was pretty sure he was an intact stray, but I could never get close enough to him to check.

Then he started standing on the ledge and spraying my window.

This afforded me a great view of the "wedding vegetables" (or "garden vegetables", as Rvan likes to refer to the phrase), and also afforded me some incentive to catch the little bastard and deal with him. So over the weekend I trapped him, had him neutered and vaccinated, and released him again. 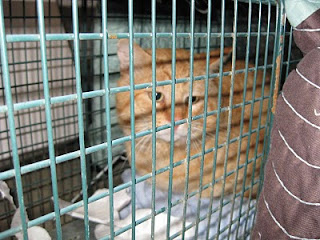 Things I learned:
1) My county animal services rents traps for $5 a day. Such a bargain.
2) Don't assume it's going to take multiple days to trap the cat. I figured it would take a few days of catching and releasing my neighbor's cats before I got lucky, when in fact I put the trap out, went to check on it two hours later, and found the cat I was looking for throwing a fit inside.
3) Don't trap a cat on a Friday night. Many places will do spays and neuters of feral cats, but most will do so Monday - Friday. There's no safe way to get food and water into a cat trap, and there's no litter box. Staying in the trap for three days wasn't really an option.
4) Having friends is really helpful. I sent out a plea on facebook and two people who were senior students while I was a resident offered to fit the neuter into their Saturday schedules.
5) Driving with a tomcat in the car for forty-five minutes may make it time to buy a new car. If you've never experienced the special pong of tomcat urine, let's just say that your sinuses may never be the same. The closer of the two places I could take him was in Elk Grove, which is slightly less than an hour away when it's raining...

So if I ever need to do this again, I'll plan things a little better.

There are two possible morals for this story.

One has something to do with civic responsibility.

The other is a cautionary tale: Don't piss me off or I will hunt you down and remove your testicles.

Any questions?
Posted by Theresa B (of Nebulopathy) at 9:02 PM

"based on head size"? I don't notice the color of animals, let alone head size. Speaking as one of a family of big heads, what does head size indicate?

From the oblivious front: On the phone with the receptionist "What is his name?" "Orange Feral" "What color is he?" "Uh... orange?"

Tomcats tend to have very large jowls. I don't know why this is, but it makes them pretty easy to pick out. Big heads in people indicate thick heads. Make of that what you will.

The jowls are just secondary sex characteristics. Like broadening of the shoulders in men. Relatively useless but a means of attracting female attention.

Theresa, have you been maintaining your license? Maybe you need to get some telazol and have it on hand. And some scalpels.

I am license-less (which is not the same as licentious, which I am not). This is the first time I've regretted that...