Trust me, I'm a professional...

Okay, as promised, new pictures of the reef tank.

Now, I realize that these look exactly like the old pictures of the reef tank, but you'll have to take my word for it -- it's much cooler with the new LEDs, especially when you get a disco strobe effect by turning all of the banks of lights up all the way. (In retrospect, perhaps we should have double-checked our assumptions about how much current these things draw before we decided on a power supply...) 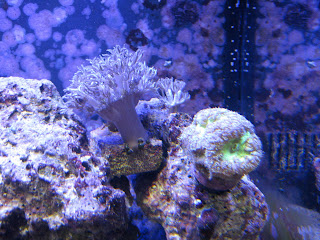 I chose this picture because you can see that the little Xenia has moved off the plug and onto the rock. I might be sorry that I allowed it to do that someday, since everyone else considers these things weeds, but I still think it's cool. My coral are walking around! 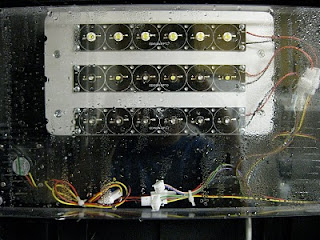 Anyhow, so far, so good. The house hasn't burned down, the coral haven't been obviously damaged, and I'm happy with how it looks. It might be time to get some more coral...
Posted by Theresa B (of Nebulopathy) at 9:46 PM

Can you highlight the region of interest, maybe w/ a red circle or an arrow? I see some blue things and some, um, other blue things, and, um, maybe a rock?

That would involve learning how to use some program. It would be easier to just show you in person.

Again, photography not really my forte...

But have you named the wee one yet? And if so, how come you haven't told us the name?

what was the project exactly? I want details! parts ordered? amount of time? plan changes as project was executed?

also, how does this spam get around the word verification?

I'll try to remember to take a picture of the old canopy to show the difference. Parts: three buckpucks and a power supply (or two turntables and a microphone), plus the retrofit kit, assorted cables, and three knobs (which are still not on yet).

I meant to take pictures throughout the process and completely forgot. Oh well.

I have no idea on the spam thing. It's annoying.