So there's this project at work... It's got a reputation, shall we say.

Last month the technical lead turned in his resignation, so I was told to quickly wrap up the project I was working on and start documenting all of the undocumented knowledge on the new project. This was followed by a week of frustration during which I was heard to wail "Does anything on this project work?" Eric laughed at that, but now that I've dragged him along with me, he's not laughing so hard.

Then the other senior technical person turned in his resignation. So we had a two for one going away lunch.

Somehow after a month I've become the person who knows the most about this half of the project. I have a team of people who are trying to work outside their comfort zones. Sometimes I think it's like trying to coordinate a water ballet with a bunch of amputees weighted with barbells. I keep telling them to point their toes and glide, and they keep drowning. It's possible that I'm not very good at giving directions...

Anyhow, here's the new design for the team t-shirt (compliments of Jeff): 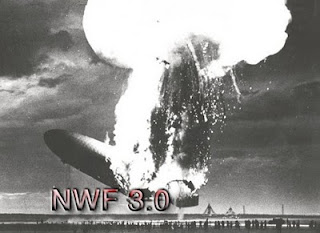 Jeff also thinks it's really funny to keep asking "Has anyone quit yet today?"

Just wait. Eric's already been sucked in. It could happen to you too...
Posted by Theresa B (of Nebulopathy) at 11:42 PM

V3 motto: 'This is one version better!'

Do these people already have jobs? PhaseSpace is hiring!

Jeff, I believe the motto should be: "Hey look, we're finally moving!"

Karen, one has a job, one is driving his truck around the US until his wife forces him to get a job. Want to hire some of the weighted-down amputees?