These kids today have it rough. They say stupid things on Twitter or Facebook and it stays around to haunt them forever. It wasn't like that when we were younger... or was it? I have stuff stored that I'm sure people would love to make go away, such as this picture of Jeff: 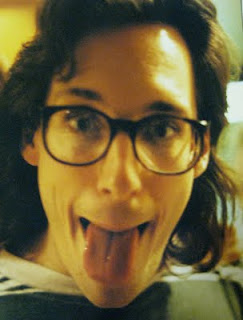 Here's a note from Jojo the Enforcer (in block letters about two inches high):
T: Do you have any band-aids? My feet yearn for old, crummy, beat-up tennis shoes.

And my reply:
J: You can't really be a [Last name redacted] if any part of you yearns for anything... Enjoy!


And then there is this undated letter from Jeff. It was written at least fifteen years ago, but it could have been written yesterday, aside from the fact that he no longer handwrites anything.

My Dearest Theresa,
If truth be told (I always liked that saying), I was initially very impressed by the size and magnitude of your latest missive. That is, until I realized that you were using non-college ruled notebook paper and that you filled much of it with cheap laughs (Cauchy-Swartz integral) -- but I do realize that you have too many irons in the fire (I always liked that saying, too -- even if I didn't know what it meant).

By the way, your artist's rendition was quite awe-inspiring -- one can easily see the pain and suffering you must have been experiencing (either that or you have a deep Freudian problem). I especially like the way the instructor's arms were craftily drawn -- indicating the wretchedness of man's existence.
...
Always remember that the squeaking wheel gets the grease and that after every night there is a day. In fact, life is much like the life of a road. At first, young and fresh and impressionable and then harder and dirtier, soon cracking and giving up chunks to be filled in by men with orange vests. If left uncared-for dangerous accidents can occur.
It's as Chancey Gardner always said -- "After the cold winter, summer will bring new growth."

The funny thing is that he also quoted Chancey Gardner to me just a couple of days ago...
Posted by Theresa B (of Nebulopathy) at 10:28 PM

Those are some sweet glasses.

Lasik has a lot to answer for.

I wish my twenties could have happened before high res photography.

The thought of writing a letter using pen and paper seems totally absurd.

Don't worry, K-poo, it apparently seemed pretty absurd to you back then as well.

On the positive side, all those high res pictures are either printed out on paper that is rapidly degrading, or have been lost with old computer drives. I would have a hard time finding a digital picture that is more than two years old.