So, tonight I did my first ever water change on the new reef tank.

Up to now the tank has been cycling and I haven't had any creatures (other than hitchhikers that came with the rocks) that needed protection from nitrates. But I tested my water last week, and the ammonia and nitrite levels were zero, so I ordered a "clean up crew" consisting of a couple of types of snails and some scarlet legged hermit crabs.

Ordering the invertebrates was a bit of a pain because most places require bulk purchases, which is what you would need for a 75 gallon tank, but not for a 14 gallon tank. But I finally found a place that would let me order a few at a time. I learned some things:
Despite this, everything survived. I had a bad moment when I looked in the bag with the hermit crabs and saw detached legs in one corner of the bag, but there are three shells and three hermit crabs with all of their legs, so either one of them molted, or a few extra parts were thrown in the bag for free.

Naturally, the next day I didn't turn on the air conditioning and it got over 100 degrees, and the tank was 90 degrees (optimal temperature is about 80 F) when I came home. But they all survived even that.


With all the extra snails, I was worried that some would starve to death, but these guys seem to be like a Caltrans road crew -- most of them are standing around doing nothing, and one snail is cleaning the heck out of the glass.

The wavy lines in the foreground are the cleaned areas. 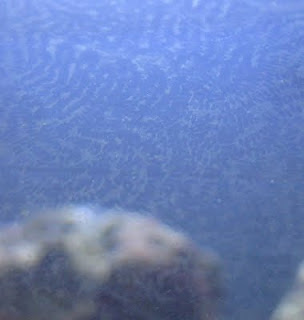 Here's one of the hermit crabs. I don't know if they do anything to clean the tank, but it's fun to watch them climb around the rocks dragging the big shell behind them. 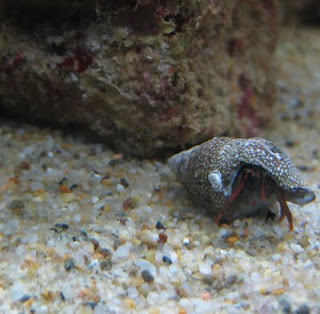 In any case, I needed to do my first water change, so I mixed up the salt water and then got ready to siphon out the two gallons of old water. I was going to just submerge part of the tubing and kink it off to get the siphon started, but the tubing I have doesn't kink well, so that didn't work. After five or six tried I realized that I was going to have to suck on the tube to get it started.

I don't remember the last time I siphoned something, but I do remember that it took a fair amount of vacuum. Maybe I was using defective tubing or something then, because when I sucked on the tube this time, the only reason I didn't get a mouthful of nasty salt water was that the tubing was five feet long.

(Okay, I'll pause here so you all can make all the hilarious dirty comments now and just get it over with.)

Anyhow, the water change went well, and I'll be ordering coral soon. Or, at least, as soon as I figure out how to keep the tank cool on hot days...
Posted by Theresa B (of Nebulopathy) at 8:15 PM

Yeah, but aren't you going to be infested with snails in a few weeks?

My son had some new baby snails show up out of nowhere in his tank the other day (freshwater) and he has no idea where they came from. He said all his plants came from a "snail-free" tank.

The way my water temperature is at the moment, I don't think I need to worry about overpopulation. Anyhow, it doesn't seem to be a problem in other people's tanks, so maybe marine snails don't reproduce as quickly? I really don't know. It's all a big adventure.

One of your son's plants was obviously hiding a little secret...

Where are all those signs warning you against mouth pipetting?

I always thought it was amazing that they even had to say that in chemistry class. Who would mouth pipette an acid?

Anyhow, it's not like I could catch any diseases from my tank, right? Oh wait, maybe I could. Whatever.

Someone at work today pointed out that I could fill up the tubing with tap water in the sink, hold the end, and use that to start the siphon. But that would negate the thrill of avoiding a mouthful of nasty water.