The Mind is a Terrible Thing

So I went to the hardware store to get diatomaceous earth for the garden, and also to get a few other things (like a replacement valve for the sprinklers that have been one hassle after another since we put them in). While I was there I got a wheelbarrow, PVC stuff (purple primer, glue, connectors, blah blah blah), a couple hibiscus plants, and a set of pliers. I had even written a list since I needed more than two things.

So what did I forget? Diatomaceous earth, the very first thing on the list. Sometimes I wonder where my brain is...

The hibiscus plants have been planted in front of the gigantic stump in the front yard. The original plan was that the ivy would grow over the stump and cover it from view. However, the ivy is not liking full sunlight, so the yard currently consists of 1) patches of about seven different types of grass, 2) dying ivy, and 3) bare patches. Some of the bare patches have composted manure heaped on top of the cracking earth. This looks about as good as you'd think it would.

The diatomaceous earth was supposed to protect the last surviving sunflower plant. 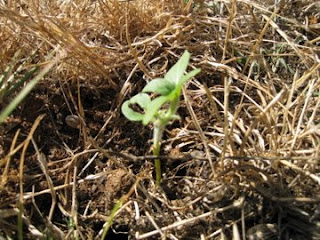 Just so you don't think I have a completely black thumb, this is a lavender plant in the garden. The bees love this thing. 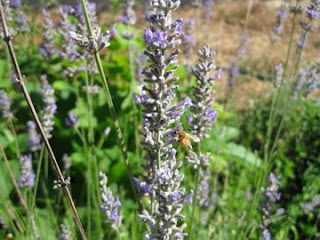 And this is what artichokes look like if you don't harvest them. The bees really like these as well. 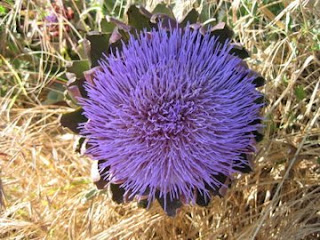 And finally, K-poo had the temerity to complain about my choice of Spock pictures in the recent photoshopping post. Is this one any better? 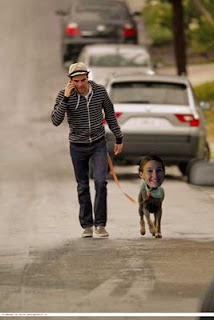 I wish I knew what temerity is.

Its funny that the one time you actually want ivy to grow, it withers away.

This is not unlike the other day when I walked past my co-workers desk and saw a picture of my face transposed from cartesian coordinates to polar coordinates.

I wish I could kill off some of my garden, it's driving me mad.

Jeff: You're my brother and you're married. Don't make me start rumors about you now...

Karen: I was originally going to title that picture "ZQ and his bitch" but I decided that it might be taken the wrong way. I'm glad you went there for me. Is your coworker stalking you? Why use a picture of your face? That's weird.

AFM: All I need to do to kill off everything in the garden is stop watering it for a few days. But I've never been able to get ivy to die before...

that can't be a picture of kpoo, can it?

Why does nobody believe that it's a picture of K-poo? Because she's smiling? She's really not as grumpy as, say, I am on a regular basis.

Isn't there some kind of enzyme you can put on stumps to get them to rot away? I think I saw that in the store once. Failing that Jeff you can find all the termites you want at Jeff's house.

D'oh. Too many Jeffs. Preview shieview.

I think stump enzymes fall into that category of "things that sound good but turn out to be total crap". It's a broad category.

And, yes, I agree that there are too many Jeffs. Just in general...