It's Not Easy Being Green

So the green cone has finally been installed. What is a green cone, you ask? No, it’s not the mythical cone of silence (although that would be a great gift for me if anyone comes across one – the conures could really use some noise control.) And it’s not a dunce cap, although the top is the right shape and it would actually fit over Rvan’s head.

To quote the frequently asked questions brochure, the green cone “eats the food you don’t”. In other words, it’s a compost bin. A super, duper, expensive, designed in England compost bin. What makes this better than your average compost bin is that it uses technology from the future to instantly vaporize anything that is added. Okay, that may not be what the company says, but the brochure claims that you can add 1.5-2 pounds of kitchen waste every day without the level inside going up. And you only have to empty it every 3-4 years. And you can put meat scraps and “animal excrement” (in moderation) in it. 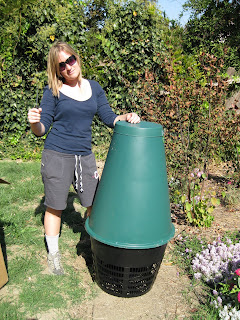 (A garden gnome stands next to the newly assembled green cone.)
What the marketing doesn’t talk about is that installation requires you to dig a gigantic hole. It’s supposed to be two feet deep and 32” in diameter. That’s a huge hole. This required two days, one to dig the first six inches in the rock hard soil, and then the other to dig the rest after watering the starter hole overnight. And you can’t really skimp on the depth since otherwise the basket part at the bottom isn’t buried. 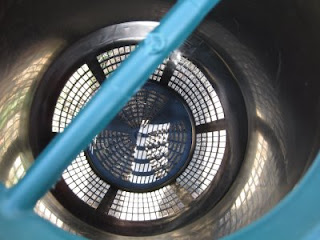 (Vegetable's-eye view prior to the suicidal leap into the abyss.)
Anyhow, the green cone is installed and ready to use, which is important as I’ve just signed up for a CSA vegetable box. Imagine that -- a box of freshly picked produce delivered to my house every other week. To quote Rvan, even if I don’t eat a wider variety of things, I’ll be putting a wider variety of vegetables into my compost bin. 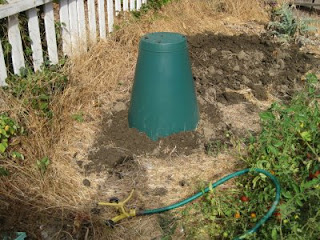 (Green cone may be easily mistaken for a missile silo after installation.)
And that's a good thing -- I want to treat the green cone well after all the money I spent on it...
Posted by Theresa B (of Nebulopathy) at 9:32 PM

Color me skeptical. I'm not sure you need a big plastic cone to rot your kitchen scraps in.

That's it, you're off my Christmas card list.
You're just jealous because you don't have one (or a yard to dig a hole in).

If only it could decompose a 20 oz diet coke bottle, then eric would be jealous.

I'm going to get Eric a weekly CSA box for his birthday and watch what happens...

Please don't have it delivered to him at work. There's no room next to the NutriSystem boxes to store more stuff. Maybe get him a food dehydrator to go with it so that he he can "archive" past shipments in his apartment. That will pay off handsomely if the front door gets blocked (from the inside) and he can't get out to grocery shop at the local gas station.

You should rejigger your garden gnome's position to show more excitement. The green cone just provided a reason for her to not finish her vegetables at dinner.

You tofu eaters wouldn't have to throw so much food away if you ate more bacon.

Rvan - the garden gnome was glowing with excitement, you just can't tell that in a still image. And I think the food dehydrator is a great idea -- I can't wait for dried kale chips. Mmm, yummy!

Jeff - I think the quotation "10 percent of her readers, says Hockett, complained that the [bacon chocolate-chip cookies] 'weren't bacony enough.'" says it all. If I remember correctly, the meatloaf on a stick had bacon wrapped around it. I was ahead of my time.