This is Crow the cat. When I first saw her she was a little bundle of fur whose eyes had just opened. She hissed at me, a less than terrifying gesture in a kitten who couldn't really walk yet and had no teeth. Despite that, she turned into quite a nice cat. (Okay, yes, she bit someone on the face and ended up on rabies quarantine a couple of months ago, but she was provoked.) Her name came from a comparison with the others in the litter. Crow was the smart one, Guido (who is still in the house) was the aggressive one, and Pigeon (who was quickly renamed Cheech and then finally George in his new home) was the one that was a little lacking in the smarts. At five weeks of age Crow and Guido were running around terrorizing each other (and the adult cats in the house) while Pigeon/Cheech/George liked to lie on his back and wave his feet in the air. 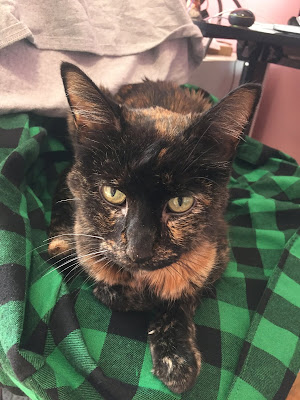 Crow and I had nearly sixteen years together, a time which involved two cross-country trips, much purring, and countless episodes of me pushing her off the keyboard. Because of her I know nearly every accidental combination of keys that can be pressed by dainty feline feet, and more importantly, how to undo the damage.

She pretty much lived to eat, so much so that she had to be fed in a separate room to give her siblings a chance to eat at more leisurely pace. She taught me that it's easier to just take the trash out than to try to bury the cheese wrapper under other garbage because burying it just meant more trash would be pulled out of the trash can on the way to the cheese wrapper. Stubborn was her middle name. But she also liked to cuddle and was always in charge of keeping the other cats clean, whether they wanted that or not.

She was a good cat.
Posted by Theresa B (of Nebulopathy) at 4:58 PM

Sorry for your loss. 16 years!

What a beauty! That's a lot of fun she packed into her life. I'm sorry you had to say good-bye.

Aww, she sounds like she was an awesome kitty, and she was gorgeous, too.

I'm so sorry for your loss.