As mentioned previously, I've been waiting anxiously for my new lawnmower battery as the weeds around my house have been multiplying and unionizing.

After many weeks of uncertainty (because Sears...) I got an email from UPS yesterday saying the package had been delivered to my porch. I hadn't heard anything which was a little weird because a) I was working from home and my office has a window onto the porch, and b) the dogs didn't bark about that although they were certainly not shy about barking at every other thing that morning. So after I told the dogs I was docking their wages, I went out on the porch and found... nothing.

Then I walked next door and found my package by my neighbor's driveway. I'm pretty sure that's a fire-able offense at UPS, but I'm guessing the driver had just delivered so many things to the business next door that it was all autopilot.

Anyhow, I'd ordered the thing from Sears because every time I tried to figure out what part to buy on the internet, I got a bunch of pictures of individual battery cells in various shapes and sizes and I just wanted to be able to lift out the old battery pack and plop the new one in. So naturally when I opened the box I found individual battery cells.

There were no instructions included, not even crappy drawings that make you wonder if doing that sort of thing in Alabama would get you arrested. About twenty screws later, I had this: 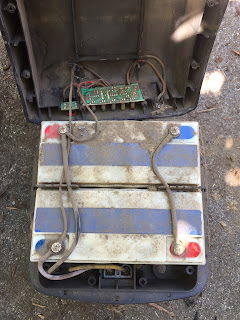 After I took the picture I called my brother Jeff for both practical and moral support. "Do I need to be careful about anything so I don't electrocute myself?" He congratulated me for taking a picture before going any further. Then he reminded me that I have a degree in electrical engineering. I didn't bring up the time that I blew up a capacitor during one of my labs.

The old cells had expanded and warped, so getting them out was a bit of a challenge, but the new ones slid back in and I didn't electrocute myself.

I left it charging overnight and this morning I couldn't contain my glee any more. At 8am I was mowing my front lawn, cackling and yelling "FEEL THE POWER!" over the (not very loud) engine as I plowed through the weeds and I looked over and saw my neighbors out front discussing what to do about one of their plants. But apparently they didn't find anything odd (or at least nothing odder) about my behavior and they didn't even look up.

It's the little things.
Posted by Theresa B (of Nebulopathy) at 8:29 PM

Congratulations! For a second there I planned to suggest a goat again. Had it been misdelivered, it could have walked over on its own.

Seriously if I knew someone who had a spare goat or two, I'd take them and figure out how to make it legal later.