Mine's the House That is Beeping

Before I forget, here are some tulips that I forgot to photograph a couple of weeks ago: 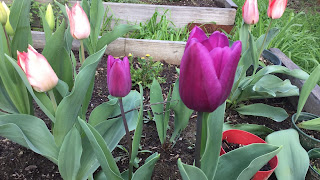 In remodeling news, the bathroom is one and a half days away from completion, by which I mean they will be finishing tomorrow except for a door which won't arrive until next week. (The company shipped the wrong thing the first time. My designer is not happy with them.)

I think I've mentioned before that as part of swapping out the electrical panel they had to install linked "smokies". The old ones are still in place, so now I have seven smoke detectors and a carbon monoxide monitor in a ten foot diameter area. My house is not huge. I always call it a "1950s tract house", but I think technically it's a "ranch-style" (without the ranch of course). I do have a book on the architecture in my area, so I know that on one side there is a 1913 Craftsman bungalow with a square bay window built on the angle of the front facade with classic tapered elephantine columns with block-shaped capitals and a gabled roof with a central dormer supported by simple elbow brackets, and on the other side is a 1928 rendition of Mediterranean Revival with a gabled front facade and classical front porch with a spiral-shaped column capped with a Corinthian capital, but for some reason the book skips over my house. In fact, my house is purposefully ignored in my neighbor's house's description with "originally this property included the lot to the immediate south". Yeah. There's a house on that lot now. And it has smoke detectors up the wazoo.

Anyhow, with all those smoke detectors I almost feel like I should start a fire or something just to get some use out of them, but I'd probably drop dead from the concentrated sound blast.
Posted by Theresa B (of Nebulopathy) at 8:57 PM