Blast from the Past

I was sending a message to a friend today and looking over an old conversation.

Here is something I wrote during the last few weeks of my residency. [Melanie was the Moluccan Cockatoo that lived at the hospital.]

I put Melanie's perch outside last week so she could get some fresh air and scream at the people on the breezeway, and the wind was up and her perch rolled off the loading dock. Oops. Really, I wasn't trying to kill her.

We have one reasonably good student this week, one student who is the most scatterbrained student I have ever seen, and one underclass student who is just awful. I can't even just have her see wildlife since she never wants to euthanize anything. (Wildlife cases in the past two days: electrocuted hawk, open necrotic fracture kite, open necrotic fracture peacock, barn owl missing the distal wing, egret with a leg hanging sideways, multiple scrub jays and crows that are fledglings and have been stuck in the heat and the smoke and die about an hour after they get here.) And I'm on this weekend. But it's the last weekend ever, yay!

In sadder news, I put Molly to sleep this week. She was possibly the stupidest dog I've ever met, but she was very sweet and a great companion just the same. 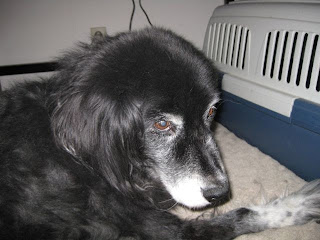 So sorry to hear about Molly. Thank you for caring for her.... Chris

Thanks, Chris! She really was a great dog and I wish she'd been able to stick around longer.
Your sister did a great thing by taking Molly in when she needed help.