Have you ever had that dream where you suddenly realize that there's an extra door in your house, and you explore that other part of your home that you never noticed in five years of living there? Yes? Well don't tell me about it. Nobody wants to hear anybody else's dreams. Even your therapist makes you write them down in a journal so they don't have to listen to it.

Anyhow, I locked up the cats and the dog before I left for work, and when I came home my bedroom was missing a wall and was suddenly 25% bigger. Very surreal.

As you know, I've spent a lot of time trying to keep the furry denizens of the home safe and sane during this remodel. Below you can see the thick cardboard (held down by blue tape) that the contractor put down to protect the hardwood floors. And halfway up the picture, just behind Ripley's butt, you can see the roll of heavy plastic that I've put down to protect the thick cardboard that is protecting the hardwood floors. Because Scooter... 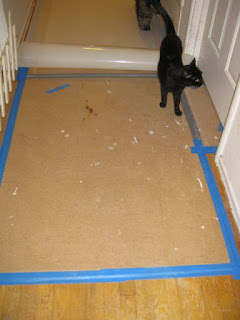 Here is what has gone on since I've been home:
Now I just need to make sure everyone is back in their safe places by 7am...
Posted by Theresa B (of Nebulopathy) at 8:28 PM