Patron of the Arts

Apparently living with me is conducive to producing artwork. (Please note that I make no claims, good or bad, about the quality of the aforementioned art.) Is it my stunning personality, or maybe just the lack of cable…?


Ten years ago Jojo the Enforcer spent the summer with me. Among the highlights of that summer:

- I found out that Johanna is easily confused by the plots of straightforward movies, mostly because she can’t tell the actors apart unless they have some striking physical differences. If one of the characters isn’t bald, fat, or lame, forget it. And if she gets confused, she goes to sleep.

- Johanna borrowed Jeff’s old car, Vlad the Impala. The car had two drawbacks (aside from its age and size): 1) it didn’t warn you if you left the lights on, and 2) one of the tires had a slow leak. I’m sure you can figure out what happened all summer.

- Johanna bought a clock for her bedroom and hung it on a nail one foot above the mattress she was sleeping on, which was on the floor. It was a very interesting look.

- Dearly departed Bonnie, the semi-feral cat, almost got stepped on many times. I thought she and Johanna had finally started to bond when I can home and found Jo playing with the cat toys, but then I found out she was tossing them at Bonnie, not to her.

Anyhow, here is the visual recording of that summer: 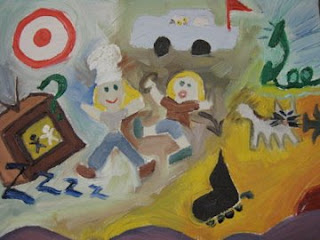 And just for comparison’s sake, the cup that Johanna made for me at the same time K-poo made hers (~25 years ago). The two year age gap between them meant that labels weren’t actually necessary, but she added a legend ("Koala Bear Regions") to the map anyhow. 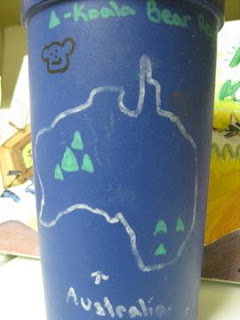 I'm just like one of those Italian Renaissance people, except I take showers and I haven't made anyone paint the ceiling. Yet.
Posted by Theresa B (of Nebulopathy) at 9:32 PM

I really can't believe that Jo-Jo's cup is more bizarre than mine! Also, why are people always falling around you????

I don't know that JoJo's cup is more bizarre than the Satanic lion...

Do I put people off balance? I don't know...

I am once again amazed at my horrible memory - I seriously don't remember the flat tire incident. Or why people are falling. Who is wearing the chef hat? I do remember Jeff drinking lots of Dr. Pepper with orange flavored vodka, though.

That would be me wearing the toque (and encouraging you to cook) along with the small gray shirt.
I'd forgotten that it was that summer when you learned the difference between "orange liquor" and "orange liqueur", which is how Jeff ended up with the orange-flavored vodka in the first place.