My Home is My Castle (mostly ruins)

It turns out that there’s really no qualification that you have to have in order to own a house aside from the ability to sign your name to about 80 sheets of paper, and a little money (or no money, in the case of many of the mortgages made in the last ten years).

For me that’s a good thing, since I never would have passed an ownership test. Granted, I’ve never been cited by the fire department for having four feet high weeds in my front yard (unlike a certain other family member), but I still may not be the right person to maintain a house.

Exhibit A: When I first moved in, there was a number sign hanging from the front light pole. It looked just sort of okay. Then, it broke and fell off the pole, so I glued it back together again and hung it back up. After that, it looked a little less okay since there were brown glue streaks on it. Then it broke again, and I just propped it up against the house. That was a year ago. 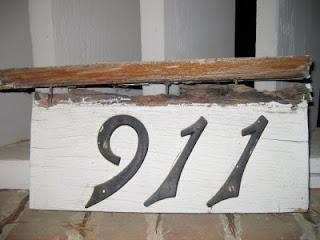 Meanwhile, K-poo moves in, and in less than two months she has painted a room, replaced the casement window operator, set up the drill press, and fabricated and hung a new sign. 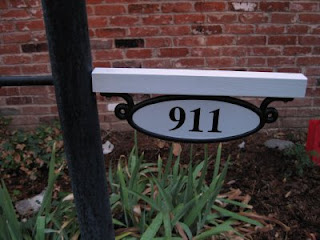 Exhibit B: I’ve owned the house for six years. I’ve never really decorated it for Halloween aside from one year when I put up fake spiderweb stuff (which I took down after the new year). K-poo moves in and makes it look cool. 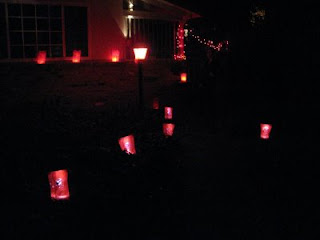 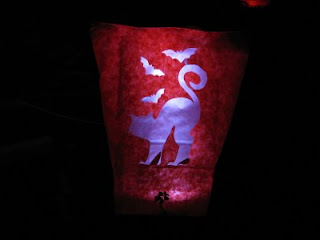 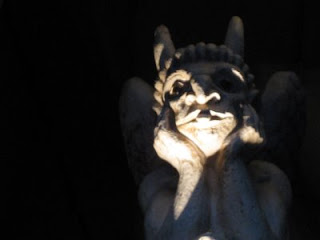 Of course, she has a little extra time on her hands. But still… 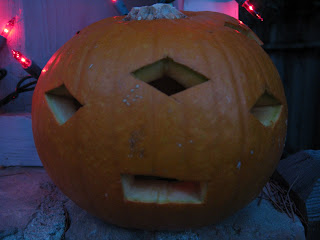 Oh well, at least my jack o’lanterns have always had two eyes. And my hands are strong enough to sign all 80 pages of the loan paperwork.

Other random notes from Halloween:

- Naturally, after months of dry weather, it rained on Halloween.
- K-poo and I independently said that one little kid looked like our nephew Aiden. Then K-poo adds "that just makes me want to grab him and keep him here." I don't think the kid's mother heard her, thank god. Because being known as the house with the crazy cat lady isn't enough -- K-poo's trying for the label of just plain crazy.
- My plan to break my October no-junk-food fast with all of the leftover candy was foiled by all the damned trick-or-treaters. Next year the light stays off.
Posted by Theresa B (of Nebulopathy) at 7:57 PM

It may look easy, but its tough to fit in stuff between episodes of "Entourage" and "Battlestar Galactica."

kpwh, imagine when (if?) you leave woodland, you'll have your own personal version of a post-911 era!

Woodland is really just a state of mind, and thus is never really left. Except physically. Someday.

It's a really, really, hot state of mind in the summer.

I wonder what kind of conspiracy theories we can concoct for the 911 experience.

Her motivator was broken?
Luke: This R2 unit has a bad motivator.

Come to think of it, isn't ruined castles half the reason people visit europe?

Hey, the trenches dug for the sprinklers could easily be expanded to provide a moat...

I could charge $5 per person for admission. K-poo could guide the tours and wear her keys on a chain around her waist.