Once upon a time, this couch was reasonably comfortably to sit on and great for stretching out and napping. That was about twenty years ago. It wasn't even too bad when I first got it, but that was about fifteen years and countless cats and a couple of elderly dogs ago.

Today we said goodbye. Or at least, today I moved it out of the living room onto the patio where hopefully the house elves will magically take it away. Alternatively, my neighbors (who have have a trailer and have offered to make runs to the dump in the past) might offer to get rid of it for me. Since they can see it from their bedroom window, I suspect that door number two is the safer bet. And if that doesn't work, I'll throw it out piece by piece. 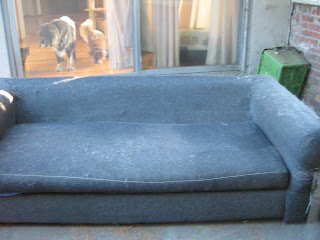 Now my living room sort of looks like I'm in the process of moving in, but that's probably still better than this: 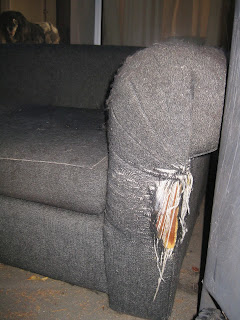 Finally, due to popular demand, a picture of Guido: 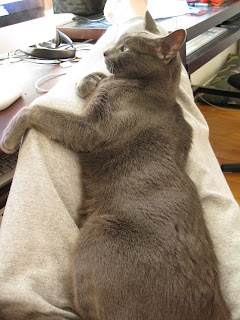 I think while I was taking this picture he was reading my email. There's a reason why he's considered the evil genius of the household. (Mostly it's just in comparison to the dogs, but he's also the one that opens the doors and gets into closed drawers.)