Return of the Kitten Cab

During my junior year in vet school, I decided to commute by riding my bike to campus. It was about a twenty-three mile round trip and I quickly got in great shape. When Spring (aka "kitten season") rolled around, I wanted to keep riding but I needed some way to bring my bottle-feeding foster kittens along so I could take care of them during the day.

A bike trailer worked perfectly -- in cold weather a couple of heating packs kept the kittens warm during the ride, and in warm weather I could open the vents and keep a nice breeze flowing. The only problem was that riding on the narrow county roads, with no bike lane and cars going 70 mph, I got a lot of nasty looks from people who thought I shouldn't be endangering a child that way.

Then my friend Charlotte personalized the trailer and the kitten cab was born: 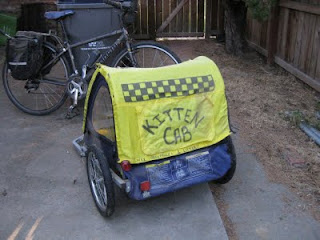 I still got some odd looks, but at least drivers didn't seem quite so angry. Puzzled, yes. Incredulous, yes. But not angry. 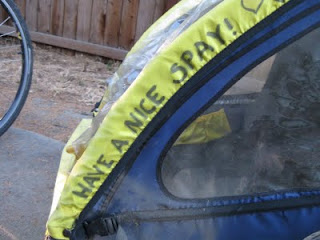 Anyhow, I can't really commute by bike anymore since it would be a 130 mile round trip on the freeways and I'll never be in that kind of shape, but I find myself reluctant to drive around Woodland on my days at home, so I dragged the bike and the trailer out of the garage today.

I was assuming I'd have to do a major overhaul on the bike since I haven't ridden it in five years, and it spent one year outside in Baton Rouge, but a little bit of oil and some air seem to have worked miracles. Sure, the chain would probably move even more freely if I finished getting the pine needles, dirt clods, and leaves out of it, but really, it's not that bad. 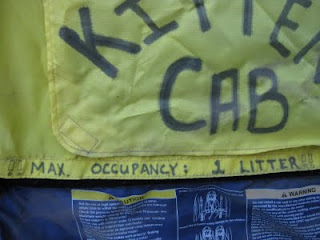 I may try riding it to the grocery store tomorrow -- it's technically within walking distance if something goes terribly wrong.

I wonder if the dogs will be too embarrassed to be seen in it...
Posted by Theresa B (of Nebulopathy) at 8:40 PM

Anyways, cycling your dog to Nugget is so, um, davis or berkeley, I'm sure they'll give you a bag of quinoa and a medal.

PS, google spell check doesn't know about quinoa? That's not gonna jive with my cream of asparagus. Hmm. Fusion, anyone?

The closest approximation I've seen in a long time.

You'll have to remodify the kitten cab into something appropriate for dogs. I don't think I'm creative enough to come up with something. I don't remember the kitten cab, but I think we arrived your senior year.

If I roll up the back flap, the "kitten cab" wording can't be seen. I think that's about all I need to do.

Training the dogs to get in will be the hard part. Molly gets stuck sometimes if I'm on one side of a shrub and she's on the other.

I rode to the grocery store today and survived. I'm pretty sure I can pull the dogs the same distance if I can get them to stay inside.