I spent a large chunk of my afternoon at work trying to get rid of some of the 1,700 messages sitting in my inbox. That's about 1,699 more things than I can think about at any one time. Obviously I have fallen a little behind.

In completely unrelated news, I found this lovely orange this morning. 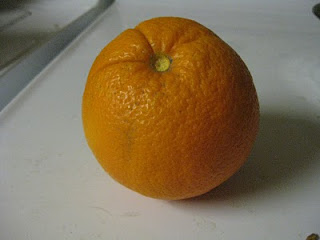 I guess one could say that I technically "stole" the orange since I just walked off with it, although I think it may have been within my legal rights. It was sitting on the public sidewalk near an orange tree. 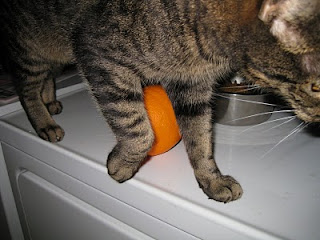 I don't know the people who own the tree. I'm pretty sure they would have been okay with me taking the orange if they're reasonable sorts since there were a lot of oranges still on the tree and a few more on the ground under it. 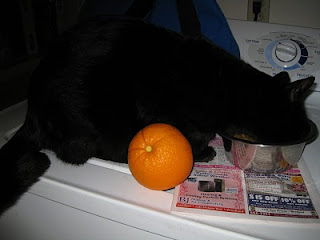 I could even make the claim that I was doing a public service by keeping the sidewalk clear. I might have even saved the homeowners from a lawsuit. After all, a morbidly obese woman on a motorized scooter zipped by me down the sidewalk mere moments later. She might have crashed if the orange had still been there (although I'm guessing that between her and the scooter the poor orange would have been crushed without even leaving a noticeable bump). 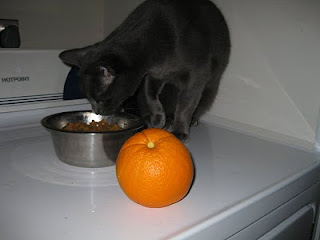 Anyway I took it, and I'm glad. My little Mandarin orange tree has a limited supply.

But I probably wouldn't have done it if the owners had been watching...
Posted by Theresa B (of Nebulopathy) at 10:28 PM

One of the few things I miss are the orange and lemon trees that are so prevalent out there. I used to eat oranges picked from the tree in the area around Zen Toro. Was that illegal? If it's wrong, I never want to be right.

I think the three second rule applied to me. As for picking the fruit -- I think the common practice is that if it is clearly hanging over the fence, it's fair game.

Besides, I see so many oranges rotting under trees, I have to believe that nobody minds is someone actually eats them.

Some friends of mine planted a peach tree in their front yard, though, which I think is a little gutsy. I don't think it's ever going to produce enough fruit in one season here to stand up against people walking by and picking peaches.